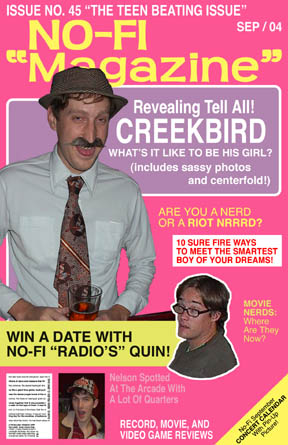 Reviewed by Chris Beyond

“Like Atom And His Package and Creekbird, Brandon Adamson sings along to self programmed synthesized music. While he may not have the experience of those one-man-bands, the songs on this album still have their charm…if not a little bit long at times. You get the idea right away with the first track “Outer Space”, lo-fi keyboards with pretty melodies that seem like they could fall apart at any time, but seem to keep it together for most of the song. Brandon’s vocals can only closely be compared to Rivers Cuomo, had he realized how empty Weezer had become and decided to chuck it all for a couple keyboards and a tape recorder. The songs really can get monotonous at times. They just don’t change very much. The title track “Springtime In Paris” is a good example of this. My favorite song on the album is “Moving Day”, but even that one could use a bit more. (No-Fi “Radio” program director) Quin put it best when he said that this album is cheesy, but almost cheesy in a good way. We both agree that we’d definitely play some of these tracks on No-Fi “Radio” so there you go. Plus both Quin and I listened to this ALL the way through the first time we put into the CD player so there is something there…maybe the next album will hit that level that this one almost reaches. Worth listening to, but I’d like to hear more from this guy…maybe experimenting with the sound a bit more, Brandon’s next album will be better.”